Thai Palad khik (Phallic Amulet).  According to a Siam Society lecture on 26 April 2011, Professor Douglas Sanders, a retired Canadian law professor living in Bangkok, gave an interesting information about this amulet. He has been researching Palad khik for twenty years.  Therefore, I would like to bring some part of his research in my blog.

“All Thai people know about palad khik.  Traditionally they are small wooden phalluses worn by boys around their waist to protect them from disease or danger.  Larger examples promote good business.  These are often seen on the tables of street vendors.  The largest may be donated to special shrines.  Only a few such shrines have survived in modern Thailand.
Palad khik in Thailand are pre-buddhist and indigenous.  Examples were featured in the recent Museum of Siam show “Amulets: The Tangible Faith and Fortune.”  Sixty-two examples are in the Quai Branly Museum in Paris.  The national artists Chalermchai Kositpipat and Tawan Duchanee have used phallic imagery, invoking the palad khid tradition.
There are popular designs – a monkey at the back of a large phallus holding a bag of money – a tiger riding the phallus – a phallus with a split tailed lizard.  Palad khik usually have old Khmer writing and magic symbols.  Buddhist monks are often involved in their creation and empowerment.  Less well known is the evolution of a lively folk art based on palad khik, with designs that have little or no relationship to earlier examples.”
Professor Douglas Sanders 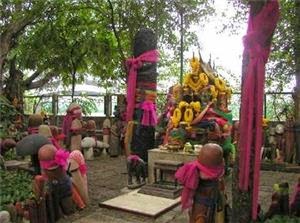 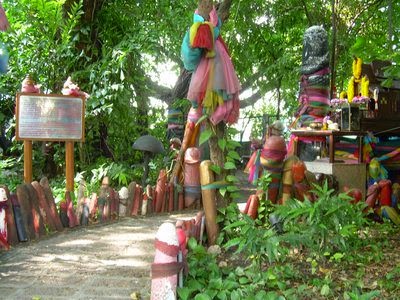 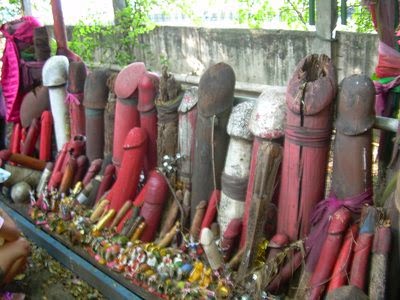 Nai Lert Shrine is to honour the female deity Jao Mae Thapthim. This canalside shrine is decorated with phallic sculptures of every size and shape. The shrine is donated by worshippers hoping to become fertile. These red tipped anatomically approximate Shiva lingam style animist totems are planted in the style of a picket fence or else offered on altars with clusters of gargantuan shafts swatched in sacred ribbons.
To get to the shrine, take BTS and get down at Chidlom BTS Station. Walk towards Central Department Store and turn left into Soi Somkhit. Walk straight and enter the Swissotel Nai Lert Park Hotel’s service entrance. The shrine is located right beside the hotel.